The Story Behind “The Forgottens”

I’ve just completed a series of sculptures I call “The Forgottens.” I had never sculpted, despite a lifetime of creative interests. No time or money for it. But a birthday check a year ago sent me to an art center near my home. I signed up for sculpting because the painting classes were filled.

I didn’t realize I was supposed to come to class with a picture of a face I wanted to recreate. I hastily looked through some art books at the Center to pick a face I felt had a story to tell, even if I had to imagine the story.

I’ve always believed there would be a lot more love in the world if we knew each other’s story. Few people are who they seem to be at first glance. If you dig a little deeper, there’s always a more interesting backstory that helps compassion well up. Wisdom can show up, too, and help tame our harsh judgments.

I selected a picture of a middle-aged African woman. Just a picture in a book. No name, no story, but her eyes told me everything. Every day as I worked on her face, her eyes pierced my heart. They seemed to say, “Will you really do me justice? Will others care about my story?”

I named her “Ananda,” a Swahili name which means “worthy to be loved.” I knew the traditional head wrap was important. Though originally imposed by overlords as badge of enslavement, I’m told that today the head wraps are worn as a proud symbol of communal identity, of surviving a terrible history which, sadly, still lives on for women like Ananda. 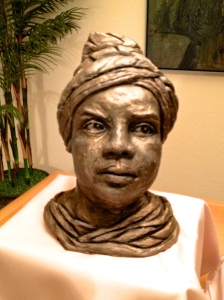 A little research told me that life today for a woman in the Third World often means hunger, death in childbirth due to lack of access to healthcare, rape in civil wars, genital mutilation, and little opportunity for education. It wrecked me. I wasn’t expecting it.

It was just supposed to be an art project. I felt so lame, trying to tell her story in clay, with clumsy hands that didn’t know how to make eyes or lips or cheekbones. I just knew Ananda deserved to be loved and not forgotten.

And so “The Forgottens” was born as an idea, a way of getting past the heart-crushing statistics that make us turn away, overwhelmed. Her face became a way to simply look into another person’s eyes and feel her pain and maybe dare to ask, “Can I do something about this? What might be possible, if I was willing?” 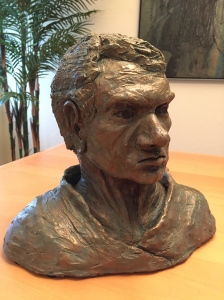 Then came “Gus”–another picture from a book, no name, no backstory until I named him “Gus,” and decided his gaunt face, vacant eyes, and severe demeanor suggested he might be homeless, hardened and bitter. His life wasn’t supposed to turn out like this. He worked hard, had a job and family. That was before his plant closed during the recession, depression drove him to too much alcohol, he lost his family, and didn’t know how to find his way home. I looked into his eyes and asked God to teach me how he must feel to be  homeless.

Again, the available statistics were wrenching. Not enough shelters, homelessness on the increase by 60% in some urban areas, due to lack of affordable housing and other factors. More families living in cars and woods and abandoned buildings. No wonder Gus is angry and depressed. It isn’t fair.

Wars in the Middle East and Africa in the last year filled the news with pictures of displaced people. I saw a picture of a teen boy running for his life. He would become “Emil,” one of the more than 50 million refugees in the world now–half of whom are children, often traveling alone or in small packs to ward off the human traffickers who prey on them.

It’s not the childhood any mother wishes on her son. He didn’t choose this battle. It chose him.

As time passed, I kept trying to keep my distance. “It’s just a clay bust,” I told myself. “You don’t need to go postal over this. You’ve got a lot on our plate. Who’s going to see this thing anyway? And care? People have their own problems. Leave it alone.”

Finally, there was “Agnes,” whose nameless face appeared in a book on how to draw facial features of an older person. The sketchy picture reminded me of a woman I had just met in the nursing home where my mother briefly lived last spring before her death.

Agnes was probably beautiful in her prime. But now, past 90 and frail, she–like too many her age–was struggling with physical and mobility limitations, living alone and in dire financial circumstances. No, she was not an anomaly. Statistics suggest her age group will quadruple by 2050 and it’s more the norm than generally realized. It could be us someday.

And then the series was done.

“Now, what?,” I thought. Would I walk away and say, “Thanks, God, for sensitizing me about these issues. I needed that. Thanks for helping me bring the project across the finish line and teaching me how much I still need to learn to call myself a real sculptor. Can I go now?”

No, I can’t. The faces won’t let me. They are my family now.

More importantly, they are part of God’s family–the poor, the homeless, the orphaned, the outcasts, the aliens and refugees. He talked about them all the  time in scripture. Remember?  Why have I dismissed all those words so easily, assuming it was mostly his problem–with me throwing in an occasional magnanimous food pantry contribution or nursing home visit? Really? With more than 2,300 scriptures instructing believers how to care about these people, is that enough?

I don’t know what comes next. It was just supposed to be an art project. The busts have been selected to appear in an art exhibition at the Storyteller Creative Arts Conference  in Naples next month. Beyond that, who knows?

Funny, though, how God does that to you. Slips past your rational arguments and defenses, grabs you by the lapels, and says, “I’m not finished with you yet.”

6 Responses to The Story Behind “The Forgottens”