Our Own Version of “Boston Strong”

In the wake of the marathon bombings, Bostonians rose up to declare to the world they would not be cowered by terrorists–homegrown or otherwise.

Blue and gold t-shirts emblazoned with “Boston Strong” sold out almost immediately. Other companies leaped in with their variations of the mantra. The One Fund Boston, set up to aid victims of the bombings, collected $34 million in ten days. Echoes of New York City nearly twelve years ago.

At the same time, I listened to a local newscast today that reported on McDonald’s employees who had worked for the fast food chain for years but still made minimum wage. A variation of the hundreds of labor protests waged every day in our country.

I drove past a high school in my neighborhood where more than 1,000 pairs of jeans hung on the soccer field fence, part of Denim Day, protesting sexual assault against women. 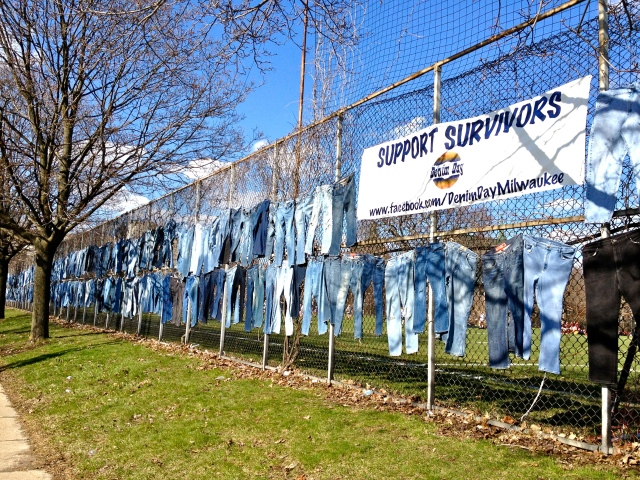 We are a people who know how to protest.

I had a flashback to when my daughter was a preschooler and we were teaching her social behavior we hoped would help her navigate successfully in life. One day she and a friend were having a tea party on the patio and I saw her indignantly put one hand on her hip and say with great authority to her friend, “We don’t say, ‘Shut up!'”

Ahhh, but we do, sweet child. Yes, we do say it. Maybe we don’t use those words, but humans have an innate skill for getting others to shut up when we want them to–through protests or through less healthy means.

In personal relationships, we can shut up others by subtly shaming and blaming them, holding onto a grudge and refusing to forgive them, shutting them out of our lives, or–the cruelest of tactics–disinterest, refusing to allow those closest to us into our interior landscape, by keeping secrets or even hiding our dreams.

But there’s a more positive way to say “Shut up!” We can choose to shut up evil, right a wrong, and rally others around a cause, because God made us to care. It’s the kind of healthy protest that empowers us and fills us with a sense of purpose.

People who don’t care deeply about something die before they are dead. It’s an awful way to live. Sickness, job angst, family pressures, or just plain sleep deprivation, can chip away at our passion. But if passion is missing, it’s time to figure why and take whatever measures are necessary to restore a pulse.

I re-read the biblical story of Daniel, a man of great talent, passion, and conviction. When hot-headed King Nebuchadnezzar created a 90-foot high gold image of himself and commanded everyone to bow down and worship it, Daniel and his pals refused. They would not worship anyone but God. An outraged king demanded they all be thrown into a blazing furnace, to show them who was boss.

With unwavering conviction, Daniel told the king, “If we are thrown into the blazing furnace, the God we serve is able to save us from it and he will rescue us from your hand, O King. But, even if he does not, we want you to know, O King, that we will not serve your gods or worship the image of gold you have set up.” (Daniel 3:17-18)

What are you passionate about? Is it a worthy passion? Daniel, essentially, told King Neb to “Shut up!” without ever saying the words. I don’t think God minded at all.

You’re invited to browse our archives at http://www.pilgrimontheloose.com

for additional posts to encourage you on your spiritual journey.

This entry was posted in Courage, Life Purpose, Our speech, Uncategorized and tagged Boston Strong, Daniel, Denim Day, McDonalds, passion for a cause, secrets, terrorism. Bookmark the permalink.

2 Responses to Our Own Version of “Boston Strong”